You're nearing the long-anticipated release of the first volume in your "Archives" project. What took so long? Has it just been exhausting finishing this first edition?
Neil Young: It has taken a long time. But we had to build a platform for it, because it's a new way of listening and looking at things. We had to build the whole program that it sits on, and that took a long time. We conceived that in the '90s, and we worked on it right until the technology was available to do it. And we couldn't have done it without Blu-ray. I've already started work on the second volume.
Do you have any sense of when that second volume will be released?
Neil Young: No, but it won't take nearly as long, because we have the platform, so now we just tag things and drop them in and they show up in the right place, and the whole thing's organized. We had to build this thing. It took a long time to build it.

This fall, the "Archive" series will begin to roll out with a 10-disc set of performances from 1963-72.
Contrary to previous reports, and Young's own comments in the media, the set will be available in standard CD and DVD configurations and not exclusively in Blu-ray, but Young says he hopes fans will take advantage of the state-of-the-art format.

"Archives Volume One 1963-1972" will be released as a 10-disc Blu-Ray and DVD collection and is expected to feature previously released live sets including "Live At Massey Hall", from 1971, and "Live At The Fillmore East", from 1970, as well as never released studio tracks, demos and artwork.

Meanwhile, Young is also apparently due to release "Sugar Mountain" on September 29. Exact details of what this album will contain are unconfirmed, but it’s widely presumed to be another set of vintage live material.

A bootleg album, "Live On Sugar Mountain", recorded at the Dorothy Chandler Pavilion in Los Angeles on the last night of Neil Young's early-1971 solo tour, has long been in circulation, and it’s likely the material for this official release may well be drawn from that show.

'Neil Young Archives Volume 1 (1963 - 1972)' (Blue-Ray & DVD Box Sets) In response to numerous customer requests but armed with very little solid info. we're going ahead with prices for these two versions of the long-overdue 'Neil Young Archives Volume 1 (1963 - 1972)'. The expected release date is now January 27th. and the two formats are as follows; A 10 Blu-Ray DVD set running for 1200 minutes and a 10 Regular DVD set with the same running time. This implies that the same material will be present on both box sets but the greater storage capacity of Blu-Ray will reproduce far superior images and sound. Now that the HD wars have been won by Blu-Ray and with equipment prices falling, a lot of people will decide to invest in Blu-Ray machines in order to enjoy this release at it's best. With this in mind, we've decided to go ahead with the following prices: 1) A 10 Blu-Ray Set for £219.99 & 2) A 10 Regular DVD set for £199.99. If, as we think, these prices change, existing 'pre-orders' will be charged at the lowest published price. The information attached to these links will be updated as the tracklisting becomes available. The Guardian has this to say "The Blu-ray discs will include videos, photographs and copies of handwritten manuscripts, not to mention high-resolution audio of unreleased songs. Audio has long been a stickler for Young, who for a long time spurned CDs due to a perceived fidelity issue. If fans aren't content with the gigabytes of data that come with the discs, they will also be able to download to the discs extra content like songs and tour information, as it becomes available" Fingers crossed for an on-time release!! 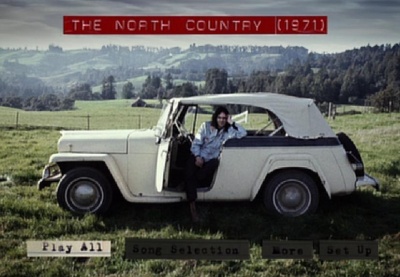 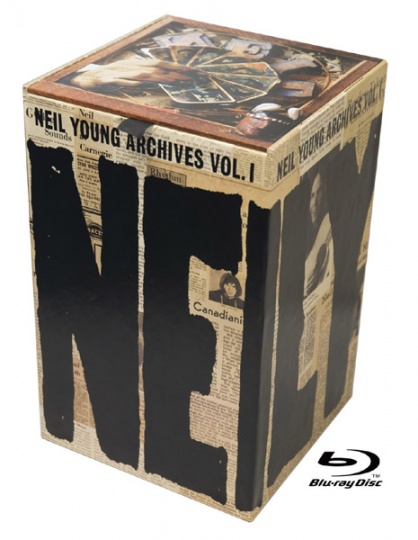 Young certainly doesn't hide much in this 10-disc monument to himself, which after all is only the first of several pyramids this rock pharaoh is assembling to enshrine his artistic legacy. No outtake, no scrap of scrawled lyrics, has been left unturned in the effort to encapsulate the Canadian's 50-year career.

Many diehard Neil Nuts had begun to wonder if the Archives would ever become a reality, so long have they been promised, postponed, rescheduled. Now the first instalment is here, is disappointment inevitable? Actually, no. Tailor-made for the boxset culture that Dadrock has become, this exhaustive project is simply the most breathtaking retro-fest of recordings, photographs, video footage, press cuttings and other artefacts ever constructed. Suffice to say that Neil Nuts could lose several weeks of their lives in the multi-layered, omni-navigational experience it offers (particularly after they've figured out the slew of cunningly "hidden" features available in the sections marked "MORE").

Young has never been ambivalent about his elevated place in the greater rock scheme: that much was obvious as long ago as 1978's three-disc Decade. Watching the Crosby, Stills, Nash & Young footage in Archives, it seems clear that half the reason CSN recruited Y was their need for a true Alpha Male in the mix. (Among the incidental pleasures herein: CSNY's impromptu Marx Brothers style comedy routine linking 'Only Love Can Break Your Heart' to 'Tell Me Why' at New York's Fillmore East...) Neither Dylan, nor the Beatles or the Stones, would have devoted the thousands of man-hours to ensuring their immortality that Neil – with the aid of in-house curators like Joel Bernstein – has done.

So why is Young, in the old L'Oreal phrase, worth it? For the simple reason that his talent evolved from the bloodless sub-Shadows instrumentals of Winnipeg garage combo the Squires, via the earnest dreaminess of mid-'60s ballads like 'Sugar Mountain' and 'The Rent Is Always Due' and then the crackling combustion of Buffalo Springfield, into something so different from – and superior to – the soul-bearing orthodoxies of his singer-songwriter contemporaries. To be sure, Neil was a navel-gazer. But unlike most of his warbling peers he was a poet of almost otherworldly feeling – 20% left-brain calculation, 80% right-brain instinct.

Among other things, Archives Vol. 1 charts and documents the transition from the fussy layering of the Springfield's 'Expecting to Fly' and 1968's Neil Young to the liberating rawness of 1969's Everybody Knows this is Nowhere. It's when Neil – in harness with disheveled stoners Crazy Horse and that wildcat rogue of a producer David Briggs – keeps things simple that he evokes and produces the most complex feelings: the fusion of grunginess and ethereality, grit and wistful lonesomeness, that's all but unique to him. The first of three 'Topanga' discs is where things get interesting: pre-Horse 1968 demos of Everybody Knows songs with Jim Messina and George Grantham show he hasn't quite arrived at the spooky proto-Americana of that album and 1970's ultra-lo-fi After the Gold Rush.

Anyone who already invested in the Fillmore East, Massey Hall, and Canterbury House live albums – and the Springfield Box Set, for that matter – may feel miffed by their inclusion in Archives, Vol. 1, though to placate them there is a new live disc from Toronto's Riverboat club recorded in early 1969. In any case it would be grumpy to moan about the incorporation of those recordings – as well as a host of tracks from Young's original Reprise albums – into something so much bigger. The abundance of rarities more than compensates, with umpteen live performances and alternate takes and mixes, some familiar to bootleg junkies: discarded country rockers like 'It Might Have Been' (live in Cincinnati in February 1970) and long-venerated Harvest outtake 'Bad Fog of Loneliness'; a solo 'See the Sky About to Rain' from D.C.'s Cellar Door in December '70; the cajunish folk of 'Dance, Dance, Dance' cut as a duet with Graham Nash in London in 1971. And so very much more.

Then of course there's video footage not even the bootleg fanatics will have seen: Neil sprawled on the grass outside his Broken Arrow barn, clutching a Coors and rhapsodizing about the "natural echo" in the hills around him; Neil with Jack Nitzsche and with manager Elliot Roberts in London, suffering back pain and fretting about the London Symphony Orchestra's contributions to 'A Man Needs a Maid'. Plus you finally get the long-lambasted Journey Through the Past on DVD – a pretty ropey home movie made under the apparent influence of Zabriskie Point and Godard's Sympathy for the Devil but boasting some amusing backstage footage. The most poignant thing about it is watching the distant, self-absorbed Carrie Snodgress so obviously not in love with a good man who needed and deserved the affection he eventually got from his wife Pegi.

Archives, Vol. 1 is not takeaway music: if you buy the Blu-Ray or DVD sets – and buying the CD version is a totally false economy – you can't rip the music anyway. It's a massive multi-media scrapbook that all but demands you sit and pay attention. Which is no bad thing in an age when on-the-go Me-Tunes have become little more than incidental aural wallpaper.

Now when did they say Volume 2 was coming out?