Miles Davis' "Kind of Blue" is the best-selling classic jazz (jazz, I say, not Kenny G) album ever, just surpassing the 4 million sales mark this year. My guess is, if you've already read this far, not only have you heard the record, but you likely own "Blue" in some form.

Four million copies of a rock or hip-hop disc is good news for a faltering record business, but that many units of a jazz recording is, until now, unheard of. And it took "Kind of Blue" half a century to get there.

After listening to the unnecessarily lavish but stunning new box set, "Kind of Blue: 50th Anniversary Collector's Edition" (Columbia/Legacy, $109.98), it's easy to hear why it endures. Endlessly inventive and challenging while remaining gently beautiful, it deserves its iconic status, even if you've taken in the opening notes to "So What" or "All Blues" at your local trendy eatery too many times.

Davis' trumpet rarely sounded as gorgeous as it did here — smooth, muted solitude bathed in cool. But the entire band was in tune with the modal approach to improvisation that resulted in such a laid-back achievement.

Sure, you know about tenor saxophonist John Coltrane's tangled splendor and the effect these sessions had on the rest of his career, but what about alto man Julian "Cannonball" Adderley's bursts of bright light? Or how Bill Evans' piano anchors the whole thing?

There's a problem for the record label, though. The final, issued takes are perfectly formed, and there isn't much previously unreleased material as on other Davis box sets. So you get the original album on blue vinyl (nice touch), the same material replicated on CD with an alternate take of "Flamenco Sketches," some brief snippets of studio chatter and introductions to songs that break down, and a second CD of material from the same era that's essentially been available elsewhere.

There is also a DVD documentary with great musicians and writers talking about how wonderful "Blue" is.

The real find on the set is a 26-minute CBS television broadcast featuring Davis and Coltrane in 1959. As for the rest, there's a gorgeous book with Grammy-bound liner notes from Francis Davis, a poster, 8-by-10 photos and, for some reason, a copy of Evans' original handwritten liner notes for the album that you can hold in your own hands.

The box set is striking, and someone who lives for this era of jazz will certainly want the multisensory experience. But the music on the original "Kind of Blue" is so self-contained and holds up so brilliantly that it doesn't need the added goodies, no matter how tantalizing.

The record industry needs to find a way to make material this timeless appeal to a new audience, and if possible, get established fans to shell out for it again. This is a pretty impressive attempt to achieve both objectives. Also included in my copy of the box was a flyer for the upcoming "Genius of Miles Davis — The Ultimate Collector's Set," scheduled for 2009 release. Sony is touting it as a "groundbreaking, multidisc deluxe set!"

Really, I can't wait to find out what they have remaining in the vaults. 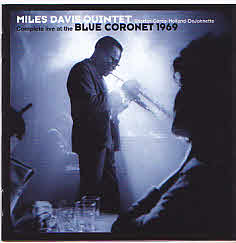