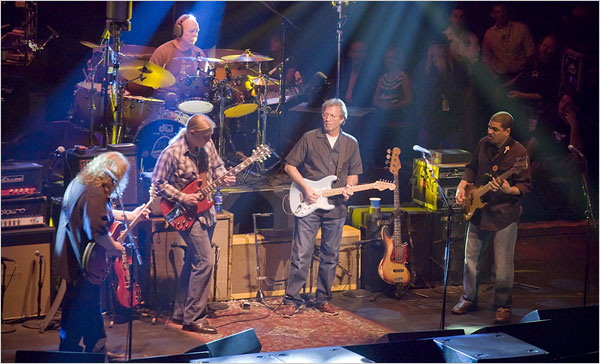 Eric Clapton got right down to business with the Allman Brothers at the Beacon Theater on Thursday night. Taking the stage to a welcoming roar — his guest turn, while unannounced, was by no means an airtight secret — he picked up his light blue Stratocaster and dug into “Key to the Highway,” a Big Bill Broonzy tune. As a blues shuffle, it was a good fit all around, and Mr. Clapton, on vocals as well as on guitar, gave it purpose and presence.

There was also a calculated weight behind the song, which Mr. Clapton recorded with the guitarist Duane Allman in 1970 for the Derek and the Dominos album “Layla and Other Assorted Love Songs.” Allman, who died the following year in a motorcycle accident, was Mr. Clapton’s original connection to the Allman Brothers. And so Mr. Clapton’s feverishly anticipated walk-on — arriving halfway through a 15-night run at the Beacon, the band’s traditional spring residency — gave the impression of a survivor paying his respects, airing a private sentiment in an extravagantly public setting.

The commemorative mood reached well beyond Mr. Clapton’s shift, which constituted the last six songs of the show. At the outset, after the lights dimmed, a written invocation appeared on a large screen above the stage: “Welcome to the 40th Anniversary of the Allman Brothers Band.”

Then came a dedication “to the man who started it all,” and a succession of photographs of Duane Allman, at work and at play. “Little Martha,” a ballad he recorded shortly before his death, provided a wistful soundtrack for this reverie; the band’s guitarists, Warren Haynes and Derek Trucks, played it with all appropriate care.

Duane Allman was just shy of 25 when he died, and his tenure in the Allman Brothers barely lasted a few years. But he was the founding father of the republic; its sound still bears his signature. The current lineup includes his younger brother, the keyboardist and lead singer Gregg Allman, along with the drummers Butch Trucks and Jaimoe — all charter members. And in their frontline interplay, Mr. Haynes and Derek Trucks (Butch’s nephew) bring their own voices, but with a profound awareness of tradition.

The first half of the show was an affirmation of bedrock values, with some of the sturdiest songs from the Duane Allman era: “Statesboro Blues,” “Revival,” “Don’t Keep Me Wonderin,’ ” “Done Somebody Wrong.” Gregg Allman was in strong vocal form, and the rhythm section (also with the bassist Oteil Burbridge and the percussionist Marc Quiñones) chugged along expertly. The set kept gathering steam as it went on: “Whipping Post,” the last salvo before intermission, felt both inevitable and unassailable.

When it was his turn onstage, Mr. Clapton seemed acutely conscious of his role, careful not to throw the tone off balance. This was probably a necessary measure, even in the wake of a satisfying first half. (Surely he understood that there were fans preparing themselves for a celestial event.) It meant something that he played “Dreams,” a somewhat ethereal staple of the Allman canon, in addition to several songs from the “Layla” files.

Mr. Clapton was impressive, thoroughly himself, on every song. But the best thing about the appearance was his camaraderie with Derek Trucks. During an extended interlude in “Why Does Love Got to Be So Sad,” they improvised a duologue with no extraneous sparks, pushing each other but also yielding, on an equal plane.

Their rapport — forged when Mr. Clapton brought Mr. Trucks on tour a few years ago — was just as deep on “Little Wing,” which occasioned a fiery solo by Mr. Haynes, and “Anyday,” which featured Susan Tedeschi, Mr. Trucks’s wife, on background vocals.

The encore was “Layla,” the song itself, and while it started as a gold medal showcase for Mr. Clapton, its mellower coda became a concerto for Mr. Trucks. Playing with a slide, he was melodic, vocal, imploring. That he was expanding on a part originated by Duane Allman only made the gesture feel all the more like an offering.

One Way Out w/Sonny Landreth, Bob Margolin and John Popper

Et puis ce matin :
"It is our hope that all remaining issues with the Beacon CDs will be resolved by the time the band goes back on the road in mid-August. If that happens, it will take about 4-6 weeks for everything to be manufactured. Therefore a September/October delivery date is probable. If these issues are not resolved by the end of August we will begin issuing refunds. Hittin' the Note and the Allman Brothers Band would like to thank all of our customers and fans for their remarkable patience during this process."